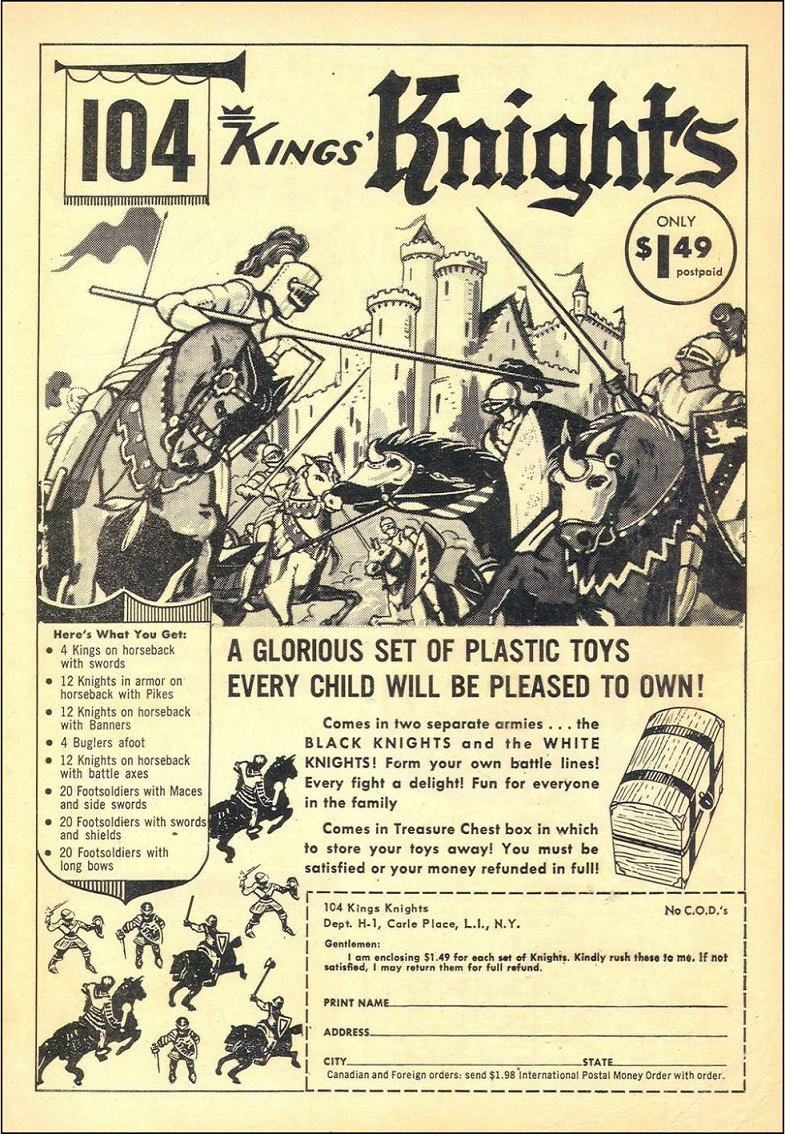 This ad advertising plastic kings knight toys is the first one I’ve seen after looking at hundreds of old-time advertisements. It comes with two separate armies, the black and the white. There is also a treasure chest which you can store the pieces in.

A knight is a person granted an honorary title of knighthood by a monarch or other political leader for service to the monarch or country, especially in a military capacity.

Historically, in Europe, knighthood has been conferred upon mounted warriors. During the High Middle Ages, knighthood was considered a class of lower nobility. 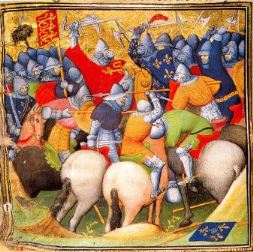 The English fighting the French knights at the Battle of Crecy in 1346. Click image to enlarge.

By the Late Middle Ages, the rank had become associated with the ideals of chivalry, a code of conduct for the perfect courtly Christian warrior.

Since the Early Modern period, the title of knight is purely honorific, usually bestowed by a monarch, as in the British honors system, often for non-military service to the country.

Historically, the ideals of chivalry were popularized in medieval literature. The modern concept of the knight is an elite warrior sworn to uphold the values of faith, loyalty, courage, and honor.

In the late medieval period, new methods of warfare began to render classical Knights in Armour obsolete, but the titles remained in many nations.

In the Early Medieval period any well-equipped horseman could be described as a ‘knight.’ In the course of the 12th century knighthood became a social rank with a distinction being made between non-noble cavalrymen and true knights.

As the term ‘knight’ became increasingly confined to denoting a social rank the military role of fully armored cavalryman gained a separate term, ‘man-at-arms’. Although any Medieval knight going to war would automatically serve as a man-at-arms, not all men-at-arms were knights.

Maximilian I, Holy Roman Emperor (1459–1519) is often referred to as the last true knight. He was the last emperor to lead his troops onto the battlefield.