You are here: Home / Science / Mapping the Moon -1 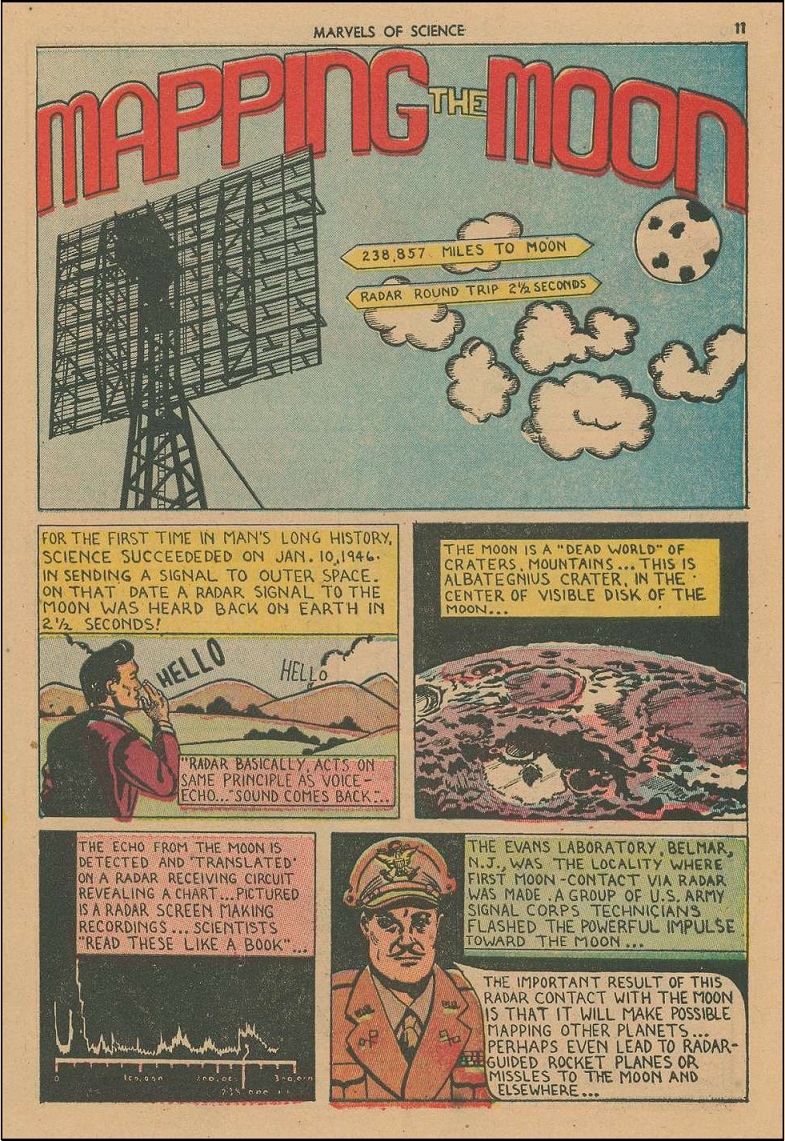 The picture above came from an early 1946 comic book. Radar was newly discovered then. It is commonplace today and is used for all sorts of things. Not only do scientists map the moon using radar but other planets and moons in the solar system have been mapped with radar. Like the comic speculates, radar is actually used now to guide missles and rockets, as well as planes and spacecraft. One other common use for radar, although technically it is not radar (because it is not an object detection system) is the microwave oven, which uses electromagnetic waves in the radar range. Originally the microwave oven was called the Radar Range, which was Amana’s microwave oven in the 50s and 60s.

Some Facts about Echos

An echo (plural echoes) is a reflection of sound, arriving at the listener some time after the direct sound. Typical examples are the echo produced by the bottom of a well, by a building, or by the walls of an enclosed room and an empty room. A true echo is a single reflection of the sound source. The time delay is the extra distance divided by the speed of sound.

Other phenomenon also can cause echos and they are not necessarily sound waves. In computing, an echo is the printing or display of characters (a) as they are entered from an input device, (b) as instructions are executed, or (c) as retransmitted characters received from a remote terminal. In computer graphics, an echo is the immediate notification of the current values provided by an input device to the operator at the display console.

In music performance and recording, electric echo effects have been used since the 1950s. In the 2000s, most echo effects units use electronic or digital circuitry to recreate the echo effect.

“A duck’s quack doesn’t echo” is a much-quoted scientific myth. The truth is that a duck’s quack does in fact, echo; however, it may be difficult to hear. This myth was first debunked by the Acoustics Research Centre at the University of Salford in 2003. It was also featured in one of the earlier episodes of the popular Discovery Channel television show MythBusters. The actual reason for the myth is that a quack is a quiet and fading sound which produces faint echoes.